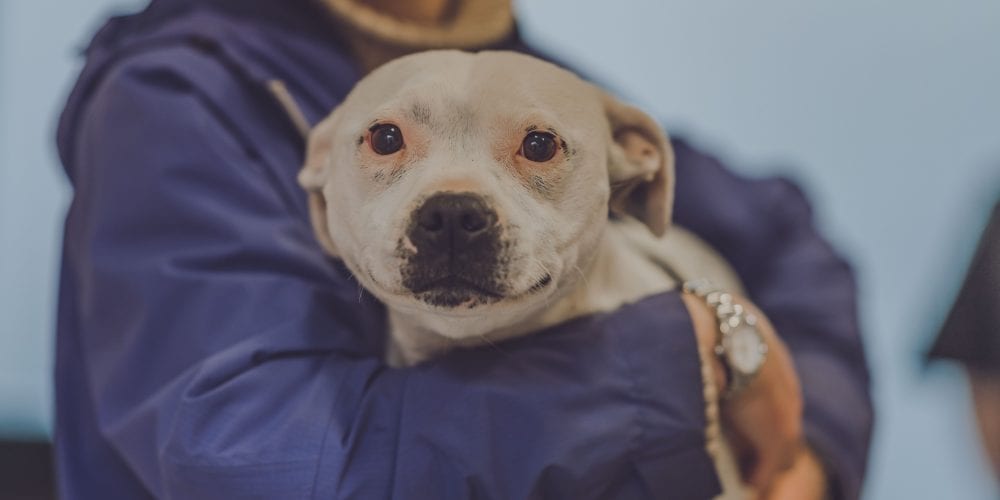 A Winsford vet has urged dog owners to be vigilant after a Staffordshire Bull Terrier had a lucky escape after it swallowed a fish hook.

The warning was issued by Head Vet Fiona Hughes of Winsford Veterinary Surgery after much-loved pooch Millie gobbled up the item while out on a popular dog walk near the lake at Knights Grange in Winsford.

Owner Rebecca Bennett, 40, was out with eight-year-old Millie when a fisherman alerted her to the fact her beloved pet had swallowed the hook, which had a line and weights attached to it.

Fortunately, vet Stephanie Lundie and the team at Winsford Veterinary Surgery, which is part of Willows Veterinary Group, were able to cut the hook in two which was stuck in Millie’s throat and ease it carefully back out through her mouth while she was under anaesthetic.

Fiona said the incident could have been fatal for Millie and added: “Fish hooks can do a lot of damage so it’s important that dog owners are vigilant in areas where people are fishing. Hooks are not designed to come out so they are very dangerous.

“You can’t just pull them out, they have to be handled carefully.

“In the worst case scenario the oesophagus could get torn and you could get leaking into the chest cavity, which can cause a nasty infection and result in death.”

Rebecca, from Salterswall, who runs her own canine business called The Place For Paws, which provides walking, day care, boarding and grooming services for dogs, is also keen to alert fellow pet owners to the dangers of fish hooks following her experience.

She said: “I always check to see if there are any fishermen around as Millie normally goes straight over to them because she knows they have bread.

“I couldn’t see anyone on the lake so thought she’d be ok. I had another dog with me so turned to see what he was doing when I heard a fisherman shouting.

“I hadn’t seen him and thought that Millie had perhaps taken his bread. The fisherman came over with Millie and shouting but I couldn’t hear what he was saying until he got closer.

“He said ‘she’s swallowed the hook’. I checked in her mouth and I could see it was still in there. She was trying to swallow it. I was in two minds about what to do.

“I could possibly do more damage trying to get it out, this was going through my mind. In the end Millie didn’t give me a choice, she swallowed it.

“If there is anything on the floor she’ll pick it up and eat it. I phoned the vets straight away and told them I was on my way. When I took her in she was starting to gag so we were hopeful it was still in her throat.”

Rebecca added: “Millie was x-rayed and you could see it was there. It was a bit intricate getting the hook out but it was such a relief that they didn’t have to open her up.

“The fisherman said Millie had come behind him and he hadn’t seen her. He was mortified but it wasn’t his fault, there was nothing he could do.

“I’d just urge other dog owners to be as vigilant as you can. You might think your dog would never be silly enough to eat a fish hook but they will.

“When something like this happens and you speak to other owners you then find that they know someone who it’s happened to and you hear some horror stories about it going down into dog’s stomachs.

“With the better weather you need to keep an eye out. I’ll be keeping Millie well away from the lake from now on. She was very lucky.

“Thankfully she’s been fine since and is back to her normal self. The team at Winsford Vets were great with her and I can’t thank them enough as it could have been a lot worse. ”

Fiona Hughes, who has been a vet for 23 years and is the Branch Manager at the surgery in the High Street added: “The x-ray showed it was lodged at the top of her oesophagus with the weights that were attached to the line a bit further down. We were able to get far enough down the throat to cut the hook and feed it out.

“It only left a small hole when potentially it could have torn her oesophagus which would have been very dangerous.

“She’s been lucky really because if it had been a bit further down we could have been looking at open chest surgery which is a major operation.

“I’ve seen a few incidents throughout my career, where hooks have got stuck in an animal’s feet. It’s particularly common with swans.”

For more information about Winsford Veterinary Surgery, call 01606 592714 or go to www.winsfordvets.co.uk