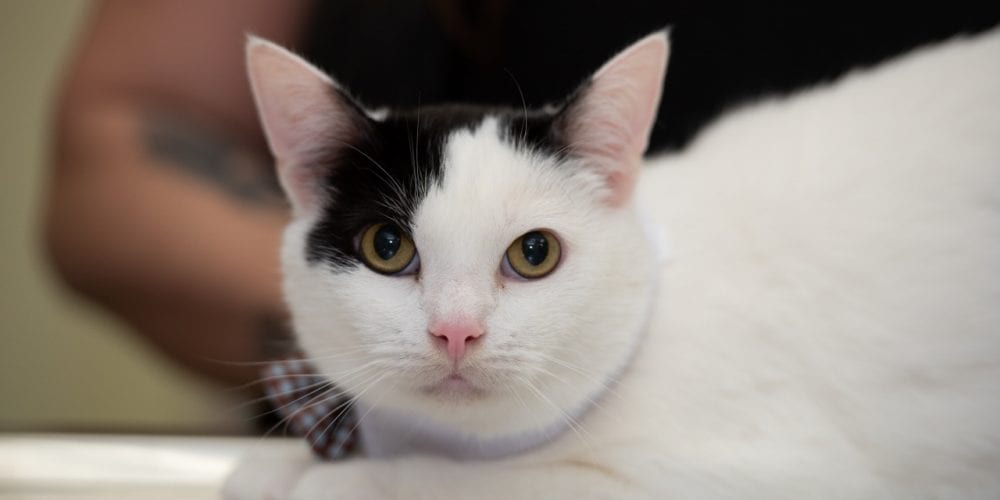 A cat with a bladder problem has made a miraculous recovery after undergoing radical “gender reassignment” surgery.

Six-year-old Piglet was facing being put to sleep, but thanks to the skill of vet Sarah Bruce at Charter Vets in Congleton, his life has been saved using a rare procedure to remove part of his genitals which allows him to urinate “like a female.”

The surgery was performed after a bladder stone was preventing Piglet from being able to pass water.

His owner, Zoe Philpott said: “I noticed that Piglet’s bladder was really distended and he was trying his hardest to wee on his litter tray but nothing was happening.

“At first, I took him to a different vets who thought he had cystitis and put a catheter in.

“They thought bladder crystals were causing a blockage and that they had dislodged them but 25 minutes after we got home, Piglet was struggling again.

“We went back and to several times over two weeks and he became really swollen with having a catheter in so many times.

“He was so poorly and I decided to get a second opinion because no one seemed to know what was wrong.”

Zoe, who lives in Sandbach, took Piglet to Charter Vets which is part of Willows Veterinary Group.

Willows Veterinary Group offers a wealth of knowledge and expertise through a network of 25 small animal practices, a referral veterinary hospital, two equine centres and a seven-office farm practice, located across Cheshire and into Greater Manchester, North Wales, the Wirral and Staffordshire. Willows is accredited by The Royal College of Veterinary Surgeons.

Zoe learned vet Sarah had come across the problem before.

The 48-year-old mum-of-three added: “Sarah said a stone was causing a blockage and they couldn’t remove it.

“His penis was so swollen and Sarah asked me to consider whether to go ahead with a radical operation to remove it all together.

“Piglet was so poorly and it was horrible seeing him suffering, he’d lost lots of weight too.

“But it was reassuring to know that Sarah had done the operation once before and it had been successful so I agreed for Piglet to have the procedure and have never looked back.

Sarah, who has been a vet since 2011, said: “When Piglet came in, he had a bladder stone lodged at the end of his penis (the urethra).

“We could either put him to sleep or perform radical surgery to remove part of the penis, where the stone was trapped, because we couldn’t flush it out.

“The surgery involved making his anatomy more like a female so now he wees like a girl.

“It is the second procedure I’ve done like this and it worked without any problems.

“He just needed a couple of week’s recovery while the outside wounds healed.

“The procedure is not something you’d usually leap into unless absolutely necessary because in many cases, the stones can be removed.

“But Piglet’s wasn’t going to come out unfortunately so we had little choice.

“He’s been brilliant since the operation, he had a mild bout of cystitis but that’s expected with surgery of this kind, and it settled quite quickly.”

She added: “I think it’s worth raising awareness about the problems with passing stones because it’s quite common in male cats.

“I’d urge owners to get them seen to straight away if they are having trouble urinating, as Mrs Philpott did in this case, because it can lead to more serious problems.

“Overall this is an exceptional case with a positive outcome. In layman terms, it is a little bit like gender reassignment surgery.

Zoe, who hand-reared Piglet – given his name because of his likeness to the farm animal when he was a kitten – said: “Piglet has recovered so well from the surgery.

“He’s regained all his weight and he’s back to his normal self, which is amazing.

“He’s so special and I can’t thank Sarah enough.”

For more information about Charter Vets in Congleton, go to www.chartervets-congleton.co.uk or call 01260 273449.